I returned from Caracas on Monday, and yesterday’s announcement of the death of Hugo Chavez was not unexpected. Just before we left last week, there was a close-up photo released of a smiling, rosy-cheeked Chavez and his daughters. It was the first public photo and mention of Chavez in more than two months. And since the last photo I remember seeing of him had him bloated and hairless from chemo, I wondered when the photo had actually been taken. 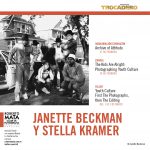 I’m heading down to Caracas, Venezuela to lecture and teach for a week with the incredible Janette Beckman. Having never been there before I’m really excited, and have heard great things about the Roberto Mata Taller de Fotografia, and the students there. Stay tuned to this space for more blogging as I hope to tell you all about it, and show the work of our students.